The set up to our surprisingly sweet morning happened the day before. It was mid–August and Shya and I were in the midst of a trip to Oregon to visit my parents and to spend a couple of days fly fishing on the Deschutes River. 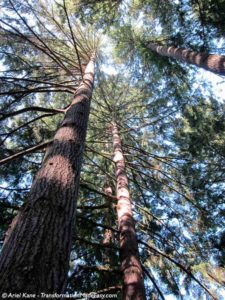 My parents live in my childhood home of Gresham, a suburb of Portland. Their home abuts a forested area and the Douglas firs tower above – stately sentinels, old and moss laden. I like to stand at the base of those trees and gaze up to admire the sunlight shafting through the bows that march up the trunks in orderly rows.

At 86 and 85 years respectively, Mom and Dad enjoy our company, as we do theirs, and our visits are very relaxed affairs. The night before our fishing adventure to Eastern Oregon we set up the coffee and packed a lunch. We awoke early to the smell of coffee, toast and bacon, as my mom was up long before dawn to see us on our way.

Two hours later it was still dark when we met up with our guide Brian at the Imperial River Inn in Maupin. Excited for a day on the water we stowed our gear in his pickup truck and, boat in tow, we went to the area where we would launch. As the sky just began to show the barest hints of light, we all loaded into the drift boat and Brian began to row downstream to our first destination, as anticipation of the day before us filled our hearts and minds.

Although it was hard to believe, we weren’t the first on the water. A couple of drift boats had managed to put in before us. Stifling a curse Brian continued downstream as the other anglers had already taken up residence in his favorite spots. 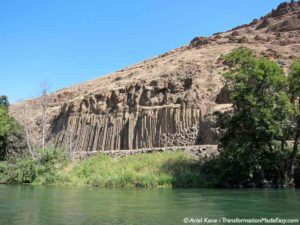 We love fishing and particularly love using our spey rods – long two handed fly rods that turn the art of fishing into a graceful dance. The rest of the day was a ballet of loops and line arcing out over the rush of the river; watching it swing downstream in hopes that a Steelhead (an ocean going trout that returns to the river to spawn) is intrigued by the fishing fly passing by their nose enough to take a bite. Cast, swing, two steps down is the cadence of this dance and it is a quiet, restive meditation where each cast is its own reward and the tug of a fish on the end of the line is an occasional bonus.

The day turned out to be glorious, hot and dry. We drifted past magnificent stretches of columnar basalt cliffs and high above we saw a couple of big horn sheep, their stout bodies supporting their massive cornucopia curls of horn. 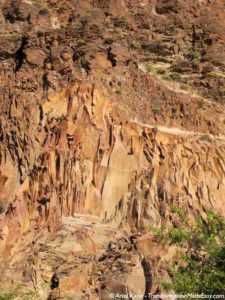 “Do you mind,” Brian eventually said, “if we start a little earlier tomorrow morning? It would be nice if we could get a head start so that we can get on the river before first light and so we aren’t following anyone.”

Our reply was an enthusiastic “Yes!”

The day ended with each of us having caught and released one fish. We went to dinner that night at the little restaurant associated with the hotel blissfully exhausted by our day on the water. After eating we took a shower, set an alarm for 4am, poured ourselves into bed and enjoyed a night of deep, deep sleep.

Our iPhone alarm roused us at 4am and we were surprisingly alert given the hour. Of course that is often the case on fishing mornings. They awaken in us the childlike anticipation of large swimming creatures lurking in the deep awaiting a chance encounter with our fly.

Our luggage was mostly packed so it was easy to house the remaining toiletries in our bags. We had left our waders hanging up so it was a simple matter to slip into our warm socks, long–johns, fleece pants and fishing shirts before donning our waders and pulling on our wading boots. As is our habit, we did a final check of the room to make sure we weren’t leaving anything of ours and, wheeling our bags behind us, we exited the room to the walkway.

The room spilled directly outdoors and we brought our bags to our rental car to leave them in the trunk for when we returned in the late afternoon. We had set up an automatic check out so after our day of fishing, we planned to have a bite to eat and then drive back to my parent’s house for the night.

It was now about 4:15 and the business of getting ready accomplished, we used our keycards to let us into the dining area that was preset for fisher folk and early travelers to use so that staff didn’t have to be on hand at that early hour.

Since we were the first patrons that morning we flipped the switch on the coffee maker and the pungent smell of fresh java soon filled the air. There were breakfast sandwiches, cold and instant cereal but we each elected to snag a couple of hard–boiled eggs and an apple. Food and cup of Joe in hand we headed outside to await the arrival of our guide Brian in his extended cab pick–up, hauling his drift boat behind.

Happily we set about consuming our food and sipping the hot black coffee. We were pleased to be ready before he arrived and eager to be out on the river before first light. It was still jet black out and in the high desert air the stars splashed across the sky like fistfuls of diamonds. 20 minutes later Brian still had not arrived so we sat on the end of the aggregate walkway, our legs stretched out before us, boots resting in the parking lot. 40 minutes later, still no Brian. By now we knew something was amiss. But given the circumstances, we had very little recourse to rectify the situation. There are no phones in the rooms at the Inn, our cell phone didn’t have reception in the area, and even if we did have phone service there would have been nowhere to call since we didn’t have Brian’s number and the fishing company where we booked our trip was not open yet. We briefly considered going back to our room but realized that if Brian did eventually show up that he would have no way to find us since the office wasn’t open and he would have no way of knowing our room number. There were two options remaining – get upset and complain or enjoy our morning. Getting upset wasn’t actually an option. What would it accomplish other than to ruin our mood and spoil our day? So we leaned into one another and enjoyed the quiet. 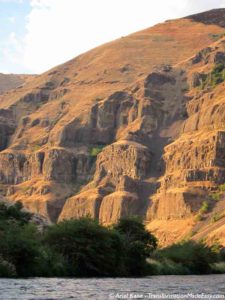 As the sky began to grey, birds began to rustle. The smell of sage wafted on a slight breeze, insects hummed. We enjoyed the warmth of each other as we sat shoulder to shoulder, quietly chatting about inconsequential things. Our morning was unfolding in an unforeseen manner and we found the experience surprisingly sweet and intimate. All forward momentum in our lives was forestalled and what was left was the moment and being there for it.

Eventually Brian came roaring up, apologetic and highly embarrassed. He had overslept. His wife had awakened him saying, “Brian, aren’t you working this morning?” around about the time he was supposed to be picking us up. The problem was he lived 45 minutes away and when he awoke he still had to hitch up the boat trailer as well as stop by the fly shop for supplies before picking us up. And just as we had no way of contacting him, he could not reach us either.

We felt for Brian. It must have been a very uncomfortable ride knowing he was late. He had to have been rehearsing his apologies, knowing that the fact it had never, ever happened before (and would likely never happen again) would be of little consequence. He must have been surprised and a bit skeptical when we told him it was OK…actually more than OK. We were just fine and had been enjoying each other’s company and the dawn of our new day.

Sometimes life shows up with unexpected twisting and turnings. If you are there for them the results can be surprisingly sweet.

Since 1987, internationally acclaimed authors, seminar leaders, radio show hosts and business consultants Ariel and Shya Kane have acted as guides, leading people through the swamp of the mind into the clarity and brilliance of the moment. Find out moreabout the Kanes, their seminars in NYC, in the UK, Germany and Costa Rica, the Say YES to Your Life! Meetups their work has inspired, their Being Here radio show or join their email newsletter. Also get information about their award-winning books.  Their newest book, Practical Enlightenment, is now available on Amazon.com.