“How Sweet it Is,” is an Excerpt from Working on Yourself Doesn’t Work, by Ariel and Shya Kane 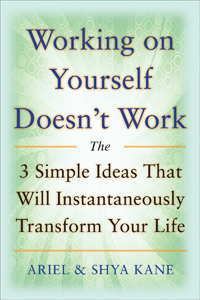 Click here for more information or to purchase this book.

There is an old story about a man who was walking through the jungle. Sensing a presence, the man looked over his shoulder and saw a tiger slinking through the foliage, following him. Quickening his pace, the fellow followed the path he was on until he reached a cliff. Looking back once again, he saw the tiger was still there and coming closer. Standing with his toes over the edge, the man noticed that there was a vine running down the cliff face and he swung out onto the vine in order to escape the tiger. Just as he quickly lowered himself down, the tiger jumped. Slashing over the edge with her paw, the tiger narrowly missing catching the man as he made his decent. As the man started to work his way down the cliff face, he looked down to the bottom and saw yet another tiger, the mate of the one at the top. The tigers settled down to wait. Hanging there, the man saw that two mice, a white one and a black one, had started gnawing on the vine above his head. It was only a matter of time before the vine would give way. Looking off to one side, he noticed a wild strawberry gleaming crimson in the sunlight. He picked it, put it in his mouth and tasted…How sweet it was.

Worrying about the future and missing the sweetness of the moment seems to be a way of life for most people. Of course, there are plenty of things to worry about today, if that is what you are used to. There was plenty to worry about in our parents’ day also and in our grandparents’ and so on back through time. And yet they survived. We are all a living testament to that. Perhaps we worry as a part of the culture we were raised in, as a survival strategy, passed down from generation to generation. Have you ever stopped to think that worry is not an integral part of well-being but something extra, unneeded and unexamined that we have absorbed from those around us? 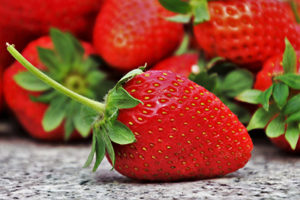 You can taste the wild strawberries that exist around you in your everyday life by being here in this moment, rather than worrying about things you cannot immediately do anything about, such as the state of the world, global warming, political conflict, wars, etc. Those things do exist but in this moment so does the chair you are sitting in, the air you are breathing and the floor under your feet.

Perhaps you tend to worry about something more personal, such as your finances, the state of your relationship or your health. Well, does worrying actually accomplish anything positive? Worry is the mind’s projection of possible futures, based on what we have experienced or known from the past.

Being Here in this moment is the great transformational agent. If you are actually engaged in being here, then life does not have to repeat itself. Unknown creative solutions can present themselves and if you are here, you are available to see them.

There is a Country Western song by Tim McGraw called, “Live Like You Were Dying.” It is about a man who discovered he had a potentially terminal disease and goes out and does all the things he only dreamt of doing…and many he hadn’t even considered; riding a bull, going fishing, being a true friend, talking sweeter, loving deeper and giving forgiveness he had been denying to others.

For the most part, we don’t live our lives as though it is our last day. There are things we do which, if we were dying, we would never indulge in. If the end were near we wouldn’t be wasting those few precious moments. The trick is in discovering how to maintain this sense of urgency and vitality without threatening oneself with dire circumstances such as imminent death. Although the song “Live Like You Were Dying” is just a song, it is representative of what can happen if you engage in your life without preference, without listening to the story of whether or not you feel like doing something and without thinking that this moment doesn’t matter.

How do you engage in your life as if this moment matters when you are truly out of touch with that, and are lost in a loop of worry, you might ask? Well, you could start by washing your dishes, making your bed, cleaning up your office, completing those things that have been incomplete and that you ignore by worrying about other things. What if worry was just a sophisticated way to procrastinate? Have you ever considered that if you are really busy, fully engaged, getting things done, your rarely have time or interest in complaining about your life?

So, if you need a place to start, look around you. Handling any little incompletion is a great start. Then move on to the next thing. You might start with the things you like to do first. Get in a rhythm. Then keep including what’s next. You will be pleasantly surprised how, as you handle the minutia of your life, the answers to how to handle the “big” things magically appear.

This is an excerpt from Working on Yourself Doesn’t Work, available on Amazon and everywhere books are sold.