An excerpt from How to Create a Magical Relationship, The Three Simple Ideas That Will Instantaneously Transform Your Love Life 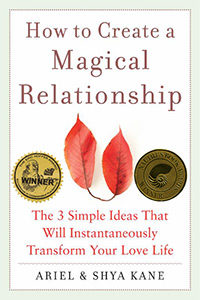 Click here for more information or to purchase this book

Have you ever found yourself in one of those moods where no matter what your partner says or does, it is all fodder for the fight? Where you are angry, disturbed, and nothing he or she says or does is right or good enough to relieve your sense of aggravation?

We recently met a couple, Hal and Mary, in one of these altered states of consciousness. They came to speak to us about their relationship and how, no matter what they did, it always ended in an upset and distress, and their fight never seemed to completely resolve. Oh sure, it abated from time to time, but the embers of disagreement were always just below a thin skin, ready to erupt at any time.

The funny thing was they were both right—from their individual points of view. From his point of view, “She would always . . . ,” and from her point of view, he was wrong and all of her friends agreed with her. This couple had a list of grievances dating back to early in their relationship, past events over which the two of them continued to disagree.

Hal and Mary had fundamental behavior patterns in their relationship that we have seen in other intimate relationships where nothing seems to resolve. No matter how much they tried to change or fix the situation, it stayed the same or became worse. So they came to us, looking at whether or not they should remain together. Their situation was further complicated by the fact that they had a sixteen-month-old child together. By now, the sense of intimacy between them had completely eroded, and while they were very devoted to their daughter, she had become the focal point for many of their fights.

The real problem was that Mary and Hal, for all of their strife, were obviously still in love. They just couldn’t find a way to sidestep the old grievances that kept resurfacing, incendiary mechanical behaviors that set them battling against their will.

Our usual approach is to find out where it all started and what happened that initiated the fight, but when we asked what had caused this pattern of behavior in the first place, Hal and Mary each had their reasons for what the other did or didn’t do that created the situation, and both of them were “right” from their points of view. Apparently, we had a stalemate. No matter what we came up with, each person felt certain that the other was the cause of their stress, upset, and dissatisfaction. This is normal for most relationships that are in trouble.

In situations like this, where the partners have been together for several years, the starting point of the disagreement is obscured forever. So what do you do to alleviate the pain when you are locked in a habituated way of relating that seems to have no beginning and no end—a way of relating that keeps accelerating in its frequency, intensity, and duration?

At some point, the reasons why you are upset become irrelevant because everything becomes grounds for the disturbance. It has been unresolved for so long that there is no way to go back and fix all of the grievances and transgressions. 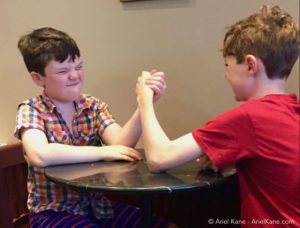 So what do you do then? You can leave each other, which is the end result that a lot of loving relationships devolve into — it’s called divorce. You can punish each other perpetually and live a life of complaint and pain. Or you can start over.

There have been times in our relationship when we found ourselves fighting and could not find a way out of the disagreement in which we were locked. Finally, we came up with a device that allowed us to stop fighting. One day, we were driving into New York City, and for whatever reason, we were deeply engaged in disagreeing with each other. It escalated and was like a sore tooth that you worry with your tongue; we couldn’t seem to leave it alone. Our silences were noisy — very noisy. And each of us was certain that we were right in our own perspective and that the other was simply wrong. We each felt picked on and misunderstood. It didn’t feel good, but there didn’t seem to be a way to resolve the conflict. Finally, we came up with the idea of starting over. We picked out an overpass ahead on the highway and said, “When we go under that overpass, the fight is over.” This meant that as soon as our car passed that spot, we were going to operate as if this disagreeable conversation had never taken place. Onward we drove. It took discipline at first to resist thinking about the altercation that had just happened, but we kept bringing our thoughts and conversation back to current things, such as what we could see out the window and our plans for the day, rather than rehashing the past.

We can’t remember now what our fight was about. It seemed so important at the time, but now the details have faded into obscurity. We knew that the fight could fade away for Hal and Mary too, if given a chance, and so we suggested that they try starting over. We warned them it would be challenging not to keep going back to past gripes, but they grew excited and intrigued at the idea.

That night, Hal and Mary had a date. They had not been on a real, live date since before their child was born. The point where they started over was the opportunity for a new beginning. They grabbed this chance with both hands, and intimacy resulted. However, the next time an upsetting event happened between them or a similar type of disagreement cropped up over their child, it took discipline to resist the temptation to revisit old events. With practice, the habit of going back to touch on old events in your thoughts or in your actions can fade away.