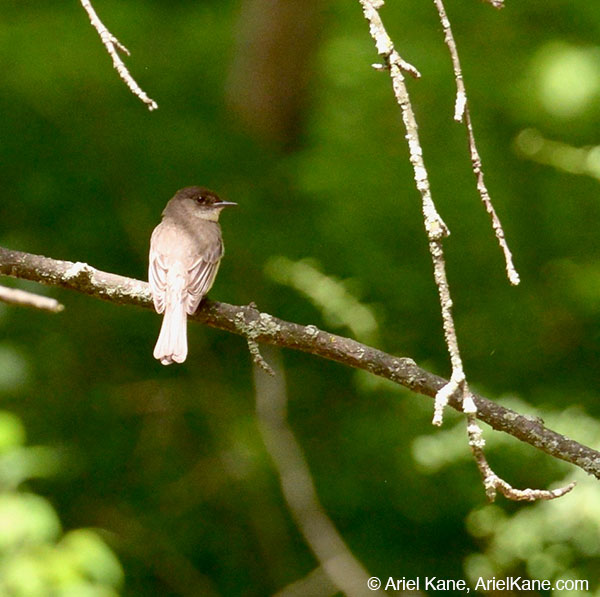 I had several choices of where to go and what to do, but I was drawn to the river that day. I was going fishing. At least that was what I had in mind when I headed down to my favorite stretch of the Musconetcong.

The “Musky,” as it is called by the locals, is a sweet little river with riffles sparkling in the sun. It had been a while since I’d cast a fly rod, since in the recent past I’d only been Spey fishing. Technically speaking, a Spey rod is also a type of a fly rod but it is a totally different, two-handed system. The singlehanded rod felt light and vaguely unfamiliar in my hand and I feared I might be a tad rusty.

On this particular day, the sky was dotted with clouds so the light through the trees was intermittently sun dappled and then diffuse. It was early spring with chartreuse leaves unfurling in the trees. The air was still and the soothing sound of water played in the background of my senses. The water is still cold at that time of year, so I was geared up with polar fleece and heavy socks underneath my waders and boots.

Quietly I moved down the gentle sloping bank until I stood in the river at about knee depth. Line pulled off the reel, an attractive little fly attached, I made my first cast…and then the next and the next, as I rhythmically made my way downstream, one step at a time with only the wildlife to mark my passing.

A fox eyed a pair of Canadian geese, sizing them up for a potential meal. Birds flew about the canopy, and a merganser duck swam upstream. It was too early in the season for the duck to be trailed yet by a dozen or more chicks.

As I made my way down to the farmhouse stretch, a cheerful little riffle where the water dances its way over rocks before emptying into a pool, I caught in my periphery a small leaf hanging from a high branch, fluttering in the wind.

How odd, I thought. There isn’t any breeze today.
I looked more closely.
Is that a bird? Is it snagged up somehow?…Yes –Yes it is! 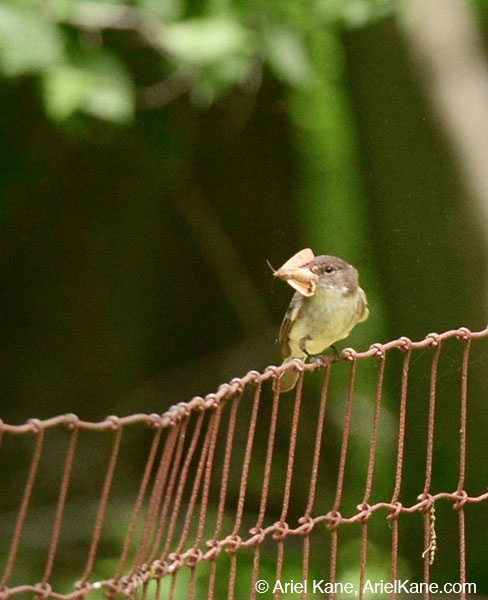 The branch with the frightened bird was hanging over the far side of the stream, too high for me to reach. I waded ashore, leaned my fly rod on a bush and picked up a stick. Wading back out beneath the limb I used the stick to snag the branch, pulling it down until it was within my grasp. Snapping the entire thing off, I turned my attention to the little creature that was fluttering wildly now. The bird appeared to be a small flycatcher of some sort: gray with a black head and tan sides. But I didn’t take much time to gather details as it quickly became apparent the source of its plight.

Someone else had obviously been to this fishing hole before me. Not surprising, of course, as this stretch of the Musky is part of the fishing club to which I belong. The angler that came before me had also been fishing with a single-handed rod and had clearly made a “bad” cast as his fly had landed in the trees rather than in the spot that was his intent. It’s easy to snag a tree or bush when the limbs hang over the river unless you make your cast just so. I’ve been to some places where the trees look ready for Christmas all year round, decked out with bright colored lures and flies left by anglers over the years.

By this point the little bird was understandably in a panic, flapping and flittering it’s heart out in an attempt to get away. Of course from his perspective I was a huge predator. Gently I closed my hand around him smoothing his frantic wings against his sides so that I could get a closer look at how he was trapped against this branch – at what was preventing his escape. The problem was tiny, oh-so-tiny, yet-oh so-strong.

The angler who came before me had left a little “trico” upon the limb, likely on a size 22 hook, so small as to be almost unseeable, with minuscule translucent white wings that imitate a trico fly. The bird had obviously been fooled by this imitation as he had attempted to catch a meal and had been caught instead.

I could feel the frantic beating of the fly catcher’s tiny heart as I gently eased the hook from his beak. I flung the offending branch and fly into the bushes and looked into the eye of the wild creature and as I opened my hand, he took wing.

By now it was dusk, the magic time when trout often surface to catch a meal. But I had thoroughly disturbed the pool where I was standing and no rising fish were in sight.

That’s alright, I realized as I waded ashore to retrieve my rod. Today’s catch and release wasn’t about trout. I had just thought I was going fishing. If I hadn’t been there to see the “leaf” fluttering when there was no wind, that little bird would have died.

Breathing deeply as day turned to night I headed for home, feeling quietly satisfied at an afternoon well spent.