This week’s article, written by Maureen Metcalf, analyzes research data provided by John Antonakis, Professor of Organizational Behavior and editor-in-chief of The Leadership Quarterly.  This article is a companion to the interview John did with Maureen and is part of the International Leadership Association’s interview series.  This series features speakers from the Annual ILA Conference that occurred in October of 2021 in Geneva, Switzerland.  The interview titled The Importance of Studying Leadership Scientifically on the Innovating Leadership, Co-creating Our Future podcast aired on Tuesday, March 22nd, 2022.

Leadership researchers have debated the impact of charisma on leadership effectiveness. What leaders say and how they say it can have a strong motivational effect and help coordinate followers’ actions. It impacts their belief about what others will do, thereby helping align people when taking on a costly and challenging set of activities such as we see as we watch the Ukrainians defend their country. Leadership is the social glue that helps pull a group together and hold it together as people strain to accomplish a challenging goal. Leaders also serve as role models. They signal what actions are appropriate. Additionally, leaders’ symbolic actions can serve as rallying cries for others – direct followers and stakeholders.

To illustrate charisma using, we look at the Russian invasion of Ukraine and evaluate the impact the charisma of these world leaders is likely to have on the war.

Before analyzing Presidents Zelensky and Putin, we want to ground the conversation in some data,  according to a paper published in December 2021 in Management Science, “Just Words? Just Speeches?” On the Economic Value of Charismatic Leadership by John Antonakis, Giovanna d’Adda, Roberto A. Weber, Christian Zehnder, “In the field experiment, we find that workers who are given a charismatic speech increase their output by about 17% relative to workers who listen to a standard speech. This effect is statistically significant and comparable in size to the positive effect of high-powered financial incentives. We then investigate the effect of charisma in a series of laboratory experiments in which subjects are exposed to motivational speeches before playing a repeated public goods game. Our results reveal that a higher number of charismatic elements in the speech can increase public good contributions by up to 19%. However, we also find that the effectiveness of charisma varies and appears to depend on the social context in which the speech is delivered.”

With this research as the foundation for our blog, we explore Professor John Antonakis’ evaluation of Presidents Zelensky and Putin. John evaluated both leaders’ charism by considering the words they used in recent speeches and their behavior and visual images during the speeches. President Zelensky scored as a significantly more charismatic leader when looking at the language he selected. 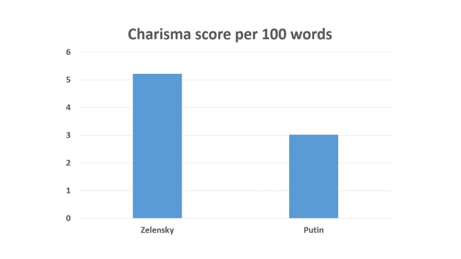 To evaluate charisma in further detail, John looked at the nine charismatic leadership tactics he uses to compare the two leaders. The chart below reflects the collective difference between the two leaders. 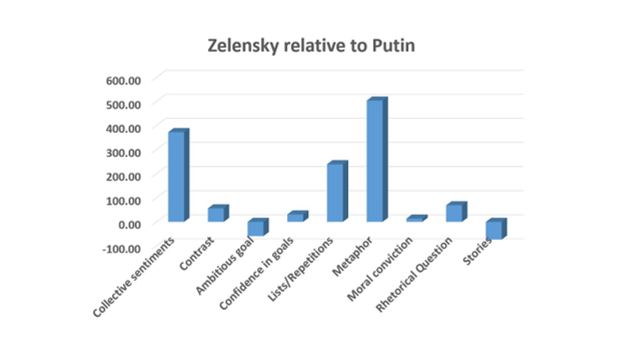 This analysis tells us that President Zelensky will have more success motivating his troops and gaining support from International Leaders than will President Putin. To add to the analysis, Zelensky is also better at engaging in symbolic acts that close the status gap between himself, his soldiers, and citizens. He dresses and acts like a regular soldier and eats with his troops. He isn’t using props and technology. We often see Putin distanced from his soldiers and people.

Zelensky is a better role model and a symbol of emulation – giving an edge to the Ukrainians when looking through the lens of leadership and charisma. Leadership works not only in motivating followers. It also helps motivate stakeholders to take action that will help bring a collective together, such as the European Union, to reach a collective goal of winning the war against Russia. Both of these leaders are role models that set the tone for others.

Because Zelensky is such a charismatic leader, his skills will help steel the hearts of the Ukrainians. They have a cause to fight for, their country and homes, and a collective identity to defend. While the Ukrainians have more to lose in this war, the leadership of President Zelensky provides additional motivation and collective identity, and President Putin provides the Russian troops and other countries he is trying to unite around his cause.

To become a more innovative leader, you can begin by taking our free leadership assessments and enrolling in our online leadership development program.

Check out the companion interview and past episodes of Innovating Leadership, Co-creating Our Future, via iTunes, TuneIn, Stitcher, Spotify, Amazon Music, Audible,  iHeartRADIO, and NPR One.  Stay up-to-date on new shows airing by following the Innovative Leadership Institute on LinkedIn.

Maureen Metcalf, the CEO of the Innovative Leadership Institute, is dedicated to elevating the quality of leaders globally.

Photo by Jehyun Sung on Unsplash