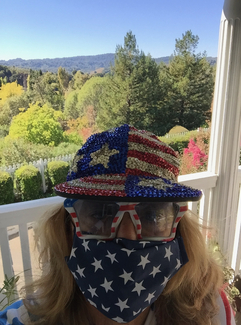 As of this writing, the pandemic has killed more than 218,000 Americans, put more than 11 million out of work, and disrupted the lives of virtually everyone. With only 4% of the world’s population, the United States boasts 20% of COVID-19 fatalities.

I have never been a political person. I stay away from conversations about politics, religion, and sex because everyone is entitled to her own opinion. I’m not a red or blue person. I’m definitely purple, and fiercely independent. Throughout my entire voting career, I have never voted for any particular party. Instead, I carefully study the issues, then vote for people, policies, and programs that will benefit as many citizens as possible.

To quote a famous film, in the last two weeks, “I’m mad as hell and not going to take it anymore.” I can no longer be silent because being silent is being complicit. I am standing up to voice my concerns because I believe in American democracy, the Constitution of the United States, the Declaration of Independence, and the rights of all humans of every color, creed, gender, culture, and viewpoint.

My views may make you angry, and that’s okay.

I am embarrassed by our current leadership. The man in the White House must be replaced. Trump has consistently avoided requiring masks that spawned the Covid-19 outbreak in the White House and beyond, including hosting a “super spreader” event in the Rose Garden to introduce Judge Amy Coney Barrett’s Supreme Court nomination only days after the death of the beloved Judge Ruth Bader Ginsberg. Instead of admitting that the Rose Garden affair was the coronavirus culprit, Trump blamed Gold Star Families for his Covid-19 infection. He’s reckless with no empathy or understanding of the role the Gold Star families have contributed. He won’t denounce white supremacists, conspiracy theorist QAnon, and he incites racial violence with his constant untethered Tweets.

Trump surrounds himself with “yes” people and when someone disagrees with him, he fires him and her. Instead of taking responsibility for the turmoil, hatred, distrust, economic collapse, pandemic folly, and civil unrest he has caused in this country and around the world, he points fingers, blames, and complains.

Worst of all, he is a liar, inventing statistics and “cures” to suit his temperament. People have died because they believe him. He began airing an ad portraying the pandemic as receding when in fact over 46,000 new cases and 700 deaths are occurring daily. He downplayed the virus when he knew it would be catastrophic.  He failed to increase testing because he believed more tests meant more positive cases, which made him look bad. If he cared about the health of America’s citizens, why did he take a joyride from the hospital amid his Covid-19 ailment exposing medical staff and his Secret Service to the disease? Why is he holding in-person rallies, without a mask, while Covid-19 cases rise, instructing us to “not be afraid of the virus”? He refuses to reveal if or when he had a negative Covid test, yet he claims he’ll kiss everyone at his rallies, because “I feel powerful. I’ll kiss the guys and the beautiful women and everybody.”

He made a campaign ad taking Dr. Fauci’s comments completely out of context to make himself look good. Dr. Fauci was distraught: “It’s so clear that I’m not a political person, and I have never ― either directly or indirectly ― endorsed a political candidate. And to take a completely out-of-context statement and put it in what is obviously a political campaign ad, I thought was really very disappointing.”

Founded in 1812, the New England Journal of Medicine is considered perhaps the world’s leading medical journal, publishing research on drugs, research, and medical treatment. It also has never made a political preference. After reviewing the Trump administration’s handling of the pandemic, its editors concluded that the president’s leadership had been “dangerously incompetent.”

“When it comes to the response to the largest public health crisis of our time, our current political leaders have demonstrated that they are dangerously incompetent. We should not abet them and enable the deaths of thousands more Americans by allowing them to keep their jobs,” the editorial stated.

Fauci said: “You should do things according to good public health guidelines. That means sufficient spacing, uniform wearing of masks, avoiding crowding situations. It doesn’t matter where you are, who you are or what your political party is.”

Donald Trump is a narcissist, racist, misogynist, and vulgar human being who has made America a joke throughout the globe. He pulled us out of the Paris Agreement and doesn’t believe in climate change or global warming despite the horrific deadly and devastating natural disasters that escalate in intensity yearly. He wants to repeal health care for those with pre-existing conditions and abolish women’s reproductive rights. He has vilified federal judges who have ruled against him, shown disregard for the rule of law, and ordered the Justice Department and federal law enforcement to pursue his personal political aims.

He has refused to commit to accepting the outcome of the presidential election and a peaceful transfer of power should he lose. Other than what the New York Times informed us about his $750 payment in taxes, he has not released his tax records.

We need to fear for our country’s democracy as this man strives to be King or a dictator like so many of his favorite leaders, Kim Jong Un, Vladimir Putin, Nicolàs Maduro, and other oppressors. To whom does he owe millions of dollars?

I don’t like politics. But I do stand for truth, decency, respect, and the desire to do the right thing in the world for everyone. I will listen to the scientists who are working to find a vaccine for Covid-19. I will stand up and speak out against the politicians that I believe are destroying our values while enriching the wealthy. I will sit down and listen to those who I believe care about policies that will improve everyone’s lives. I have attempted to see what his base sees in him. I’m baffled.

Trump must be voted out! We can not allow him to call the election fraudulent without any evidence because people are voting by mail. He votes by mail!

Trump’s enablers should be ashamed that instead of standing up for the people, they are only protecting a party. Perhaps it is time to get rid of the party system and let everyone be independent to think for herself. Government is not about party politics it is about us and the greater good for all.

The stakes in this election have never been higher. Are we going to defend democracy or re-elect an egotistical, self-absorbed despot? Trump had four years to fulfill promises but he has not made America great. He and his cohorts have caused a schism and a divide that will take years to heal.

If you stand for nothing, you’ll fall for anything. Have courage, be brave, stand up for justice, equality, and the rights of all humans.

I voted for Biden/Harris and encourage you to vote for them too.

Be the Star You Are!® 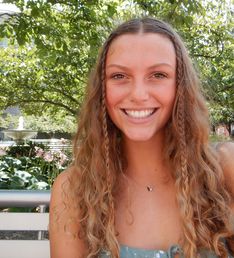 “Keep America great,” he says. Keep America Great. This is the slogan on which our current president is runs his entire campaign. Yet, one then must ask what are the implications of this statement. Truth be told, never in history have we ever moved forward as a society by simply shutting out the sins and darkness that underlie all aspects of our government and world. During his Presidency, America is not great, not even close.

In the eyes of the international community, Trump’s America is seen as one of disgrace, humiliation, and embarrassment. In the eyes of the citizens of America, it is sickening to see a country so beautiful, so brave, and so majestic crumble under the reign of a tyrant.

In voting for a presidential candidate, one must look at their own values and see the candidate’s moral code. Trump is a president with zero morals, zero diplomacy, and zero decency as a human being. He has proven time and time again that:

President Trump does not care about what America stands for, the American dream, the love and bravery that made us so powerful. He is a liar and a cheat.  Look at his own tax reports and the business school he created that scammed thousands of students.

It is time that we join together and take back what is ours, the country and land that once made us so proud. We cannot afford another four years of this disaster.

Please vote for Biden/Harris in this election because your vote is a vote for humanity.

My name is Andrea Smith and I am currently a senior at Santa Margarita Catholic High school. I have a strong passion for the reform of the criminal justice system and to fight the systemic racism that is plaguing our nation. I hope to study sociology and journalism in college and in my free time I love to spend time in the water whether that be surfing, rafting, or swimming. Hosting Express Yourself!™ Teen Radio and being a reporter for In the Spotlight is a dream come true!  🙂 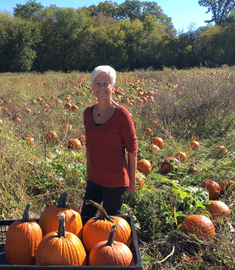 There was a pause.

“Do you want to talk about it?” asked Piglet.

“That’s okay,” said Piglet, and he came and sat beside his friend.

“Difficult Days are so much easier

when you know you’ve got someone there for you. And I’ll always be here for you, Pooh.”

And as Pooh sat there, working through in his head his Difficult Day, while the solid, reliable Piglet sat next to him quietly, swinging his little legs…. he thought that his best friend had never been more right.”      A.A. Milne

Sending thoughts to those having a Difficult Day today, and hope you have your own Piglet to sit beside you.

Karen Kitchel who penned two chapters in the book, Be the Star You Are! Millennials to Boomers Celebrating Gifts of Positive Voices in a Changing Digital World, is the Kindness Coordinator volunteer with BTSYA. She serves meals to the homeless and is a volunteer teacher, writer, job coach, and mentor. www.scatteringkindness.com

BE UPLIFTED WITH BE THE STAR YOU ARE!® RADIO BROADCASTS

As part of our Be the Star You Are! Disaster Relief Outreach program (https://www.bethestaryouare.org/copy-of-operation-hurricane-disaste), StarStyle® Productions, LLC and Be the Star You Are!® are showcasing authors, artists, actors, poets, musicians, and many others, all of whom are out of work. We believe in supporting creativity that provides escape and joy, especially during tough times. Tune in to StarStyle®-Be the Star You Are!® on Wednesdays at 4pm PT for “Wednesdays with Writers and Performers” LIVE http://www.voiceamerica.com/show/2206/be-the-star-you-are as well as our teen program, Express Yourself!™ airing on Sundays at 3pm PT for “Super Smart Sundays” https://www.voiceamerica.com/show/2014/express-yourself

Both programs broadcast on the Voice America Network, Empowerment Channel and will be archived on that site.

MAKE A DONATION TO OPERATION DISASTER RELIEF TO HELP SURVIVORS OF THE FIRES AND HURRICANES!

Make a DONATION through PAYPAL GIVING FUND and PAYPAL with 100% going to BTSYA with NO FEES:  https://www.paypal.com/fundraiser/charity/1504

DIRECT LINKS you can use for Be the Star You Are!®

We invite you to volunteer, get involved, or make a donation. Make a DONATION through PAYPAL GIVING FUND and PAYPAL with 100% going to BTSYA with NO FEES:  https://www.paypal.com/fundraiser/charity/1504 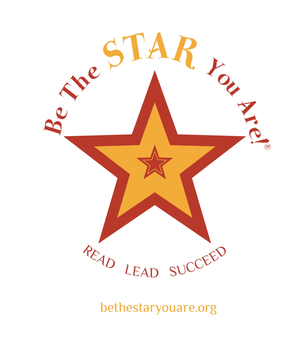 YOU MATTER! VOTE TODAY FOR DECENCY!