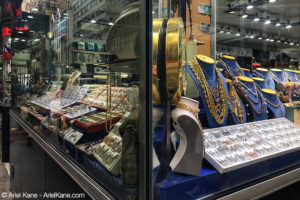 When moving through life with awareness, there are gems to be discovered each day, provided you look. It requires you to slow down and see what is right in front of you rather than racing forward to some “better” destination. It takes the willingness to discover what is there even if others may think that you are being silly or impractical. It also may require a dose of childish enthusiasm as it did in the case of our young friend Milan, from Brooklyn, New York.

Milan’s interest in gems began at the tender age of six. What started with digging for stones in the park has now blossomed into a full-fledged passion. Like many children, he was fascinated by a piece of quartz found in gravel or an interestingly-shaped rock found by chance. Then his father introduced him to the field of gemology and now Milan has an extensive collection of books on the subject as well as a small collection of semi-precious and precious gems of his own.

Somewhere in his fledgling studies, Milan heard about an urban tale that sparked his imagination. According to lore, on 47th Street between 5th and 6th Avenues in Midtown Manhattan, home to the legendary Diamond District, is a place where you can find treasure. 47th Street is filled cheek by jowl with stores, each more gaudy than the next, hawking gold and jewelry, precious gems and bling, but according to this legend, the wealth was purported to not only be behind the plate glass windows and security systems. Young Milan had heard that if you look hard enough and if you are dedicated to the search, you can find loose stones on the sidewalk itself. He was told that if you take your time, you will find diamonds at your feet that have been dropped by careless couriers or unsuspecting buyers.

A silly notion some might say. Others might scoff at how ridiculous one would look, slowly meandering, nose virtually to the sidewalk. Practical parents might discourage this dream as childish and having no merit. Yet Milan’s parents did not. Both his mom and dad have repeatedly taken him to the diamond district so that he can scour the streets. There he has found two black diamonds, one ruby, four emeralds, six sapphires and fifteen diamonds. His largest stone, a triangular half-carat diamond, has been appraised for $600. 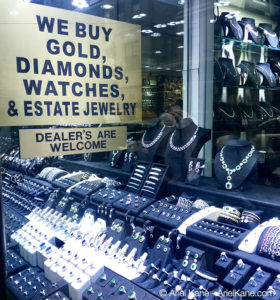 Now at 15, Milan continues to pursue his passion for gems and shiny things and has grown an extraordinary collection. He has also discovered that while finding gems fuels his enthusiasm and creativity, sharing them with others feeds his heart.

We rather doubt that most people have found wealth in the cracks of the sidewalk. It wouldn’t even occur to most people to look. But to us Milan’s childish dream is a gentle reminder to slow down and look at where we are, who we are with, and what we are doing. It is a simple suggestion to go about one’s life with awareness and persistence, for in this moment there are gems to be discovered if only one has the eyes to see.

Since 1987, internationally acclaimed authors, seminar leaders, radio show hosts and business consultants Ariel and Shya Kane have acted as guides, leading people through the swamp of the mind into the clarity and brilliance of the moment. Find out more about the Kanes, their seminars in NYC, Germany and Costa Rica, the Say YES to Your Life! Meetups their work has inspired, their Being Here radio show or join their email newsletter. Also get information about their award-winning books. Their newest book, Being Here…Too, Short Stories of Modern Day Enlightenment, comes out this November and is now available for pre-order on Amazon. One night I pulled into our local Pilot station to fill up our Prius with gas. To my surprise, as I stepped out of the car there were hundreds of Mayflies dancing in the overhead lights and alighting on my windshield, hood and top of the car. I am used to seeing Mayflies near rivers as they are aquatic insects whose life cycle is one that fisher folk follow closely since these delicate flying insects are a major food source for trout. I was unaware that the Pilot station was located anywhere near water but it must have been because the air was thick with Pale Evening Duns, the light yellow Mayflies that hatch in the spring and summer.

The young man who fills the tanks stepped over and I offered my credit card and asked him to fill it up with regular. He began swatting the air grumbling, “I hate bugs! They’re everywhere.”

His comment took me aback. Mosquitos, sure, I hate those, too. But Mayflies? As I stood there with the gas meter ticking in the background I realized how one is enculturated to hate some things and accept others. How we are taught to get the heebee-jeebees about certain things and how we learn to take others in stride. And often how, once we learn to “hate” something, we hate it forever without really taking another look.

As a country girl, growing up in Oregon, we didn’t have the video games and other diversions that kids have nowadays so when my sisters and I played outside we invented games with leaves and insects, salamanders and mice. Being toted up the hill on the back of a tricycle cost a handful of leaves. Soup served in the playhouse consisted of wild peppermint in water. Little field mice were trapped under up-side-down berry cartons and inspected at our leisure through the green plastic mesh. And grasshoppers were caught at Grandma’s house. We could be heard shrieking and squealing our childish delight as their feet tickled our hands and as they bounded away in unpredictable trajectories.

My grandfather had also taken me fishing in my youth, to a little river just below Mt. Hood. The Zig Zag River was a source of wonder and he introduced me to “Periwinkles”. These creatures hung onto the underside of rocks in the river, their shells a cocoon of tiny pebbles. We would peel them and use the “worm” inside to bait our hooks to catch hungry trout. I now know that Periwinkles were just a name my Grandpa made up and that these bugs are actually the larval stage of a Caddis Fly, also a favorite of trout. But when I was a child I knew nothing of bug magic. Periwinkles were just one of the small details of daily living taken for granted and filed away in the recesses of one’s childhood memories, seldom dusted off or reexamined in later life.

As my husband Shya and I became more interested in the art of fly fishing, particularly on rivers, we were introduced to entomology, the science of bugs. I learned that Mayflies, for instance, mate in the air and the female lays her fertilized eggs on the water, which then float down to the riverbed where they gestate and turn into the larval stage. Eventually the larva swim to the top of the water column, where they shed their case and emerge to fly away and start the cycle once again. That’s why trout will eat the larva, the immerging flies as they swim toward the sky or the flies as they dance on top of the water, dropping their eggs. They will also key in on the spinners, spent bugs who have mated and fall back to the surface to be eaten or reabsorbed into the river itself.

There have been days on the river when I have seen a patchy fog of gnats, a smoky winged haze as millions undulate millimeters above the water’s surface skin as far as the eye can see. At times there are Trico spinners masquerading as gossamer tree fluff floating weightlessly down toward the water’s slick surface. It is easy to watch their effortless descent only to be surprised as they abruptly change direction and dance skyward on translucent white wings.

As I stood by my car, I watched the buttery colored Mayflies, dainty ballerinas, wings erect, waiting to make their entrance on a watery stage. I did so with a sense of wonder, of childlike innocence.

When my tank was full and the pump clicked off, the attendant returned. “Damned bugs,” he said as he removed the nozzle, replaced my fuel cap and closed the fuel door. No, I thought. It’s magic. Bug Magic. July 12: Willingness for Wonder Life can be jaw-droppingly, awe-inspiringly full of wonder if you are willing. Join the Kanes in Being Here and have fun, be curious and celebrate life. Listen Live this Wednesday, July 12th at 9am PST / 12pm EST on the VoiceAmerica Empowerment Channel.

You can also listen to Being Here on the go! Stream or download new and archived episodes to your smart phone or mobile device with these applications:

– Stitcher Podcast app for Any Device

Enthusiasm: What Happened to Yours? By Ariel & Shya Kane

âEnthusiasm is the electricity of life.â – Gordon Parks

Remember when you were a kid and you could get wildly enthusiastic over small things, like rocks in the yard, snowflakes or even an earthworm? Have you lost your âsparkâ? Tune in to Being Here with Ariel and Shya Kane and recharge your enthusiasm for life once again. Callers welcome at Tel# 1-866-472-5795!

Listen Live this Wednesday, October 19th at 9am PST / 12pm EST on the VoiceAmerica 7th Wave Channel
After this Wednesday, you can stream or download this episode and over 400 episodes on a wide variety of topics from our archives here.